Synchronizing with the clocks aboard TESS

In order to reliably study stars, TESS data have to be very accurate in time. In consequence, to check that the time on board of TESS does not have an offset or a drift, we carried out from the ground and from space contemporaneous observations of eclipses of binary stars. Comparing the timings at which the eclipses took place in a complex study that is fully detailed in the publication, we determined that both clocks (the one on board of TESS and the one corresponding to the ground-based stations) were actually synchronized.

The work was done through an international collaboration of researchers based in Denmark, in the United States, and in Argentina. The PI, Carolina von Essen, is assistant professor at SAC. 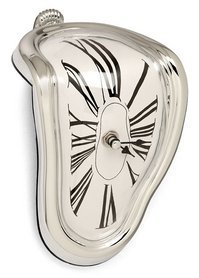 SAC has characterized the atmosphere of an exoplanet using TESS data

In the study, the researchers find that WASP-33b's host star, of delta Scuti type, shows non-radial pulsations in the milli-magnitude regime, with periods comparable to that of the primary transit. Analyzing TESS photometry the researchers found 29 pulsation frequencies, that were used to clean the light curve and study the planet. A secondary eclipse depth of 305.8 +/- 35.5 parts-per-million (ppm) is reported in the paper, along with an amplitude of the phase curve of 100.4 +/- 13.1 ppm and a corresponding westward offset between the region of maximum brightness and the substellar point of 28.7 +/- 7.1 degrees, making WASP-33b one of the few planets with such an offset found so far.

The researchers also determined the Bond albedo, heat recirculation efficiency, and day and night side brightness temperatures. From the detection of photometric variations due to gravitational interactions, they estimated a planet mass of M_P = 2.81 +/- 0.53 M_Jup, consistent with literature values. Analyzing the stellar pulsations in the frame of the planetary orbit, they found no signals of star-planet interactions. The article can be found on arxiv, and has been accepted in Astronomy & Astrophysics. 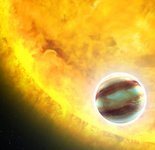 Artist’s impression of a hot Jupiter (left) and its host star. Credit: NASA.

We present an atmospheric transmission spectrum of the ultra-hot Jupiter WASP-76 b by analyzing archival data obtained with the Space Telescope Imaging Spectrograph (STIS) on board the Hubble Space Telescope (HST). The dataset spans three transits, two with a wavelength coverage between 2900 and 5700 Å, and the third one between 5250 and 10300 Å. From the one-dimensional, time dependent spectra we constructed white and chromatic light curves, the latter with typical integration band widths of∼200 Å. We computed the wavelength dependent planet-to-star radii ratios taking into consideration WASP-76’s companion. The resulting transmission spectrum of WASP-76 b is dominated by a spectral slope of increasing opacity towards shorter wavelengths of amplitude of about three scale heights under the assumption of planetary equilibrium temperature. If the slope is caused by Rayleigh scattering, we derive a lower limit to the temperature of∼870 K. Following-up on previous detection of atomic sodium derived from highresolution spectra, we re-analyzed HST data using narrower bands centered around sodium. From an atmospheric retrieval of thistransmission spectrum, we report evidence of sodium at 2.9σ significance. In this case, the retrieved temperature at the top of theatmosphere (10−5bar) is 2300+412−392K. We also find marginal evidence for titanium hydride. However, additional high resolutionground-based data are required to confirm this discovery.

The paper can be found under the followin arxiv link.

Ever since the earliest theoretical predictions 20 years ago, the chemical elements potassium and sodium were expected to be detectable in atmospheres of “hot Jupiters”, gaseous planets with temperatures of a few thousand Kelvin that orbit closely around far-away stars. While sodium was detected with high resolution observations already early on, potassium was not, which created a puzzle for atmospheric chemistry and physics.

A team of astronomers led by AIP PhD student Engin Keles detected the chemical element potassium in the atmosphere of an exoplanet, for the first time with overwhelming significance and applying high-resolution spectroscopy. The Potsdam Echelle Polarimetric and Spectroscopic Instrument (PEPSI) at the Large Binocular Telescope (LBT) in Arizona was used to study the atmosphere on the Jupiter-like exoplanet HD189733b. 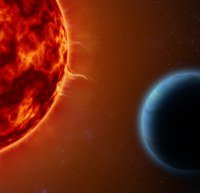 WASP-33, the planet-star system that is the subject of this research work, lies some 380 light years away from Earth. The host star is the first Delta Scuti star known to be orbited by a hot Jupiter. The pronounced stellar pulsations, showing periods comparable to the primary transit duration, interfere with transit modeling. Thus, it is extremely challenging to carry out a proper characterization of the physical properties of the exoplanet without addressing the variability of the star.

The study, published in the journal Astronomy & Astrophysics, analyses the chemical composition of its atmosphere. This is important because "The current models of exoplanetary atmospheres predict that the ultra-hot Jupiters should be free of clouds, and present a range of oxides in the visible spectrum, such as vanadium oxide, titanium oxide, and aluminium oxide," explains Carolina von Essen, of the University of Aarhus (Denmark), the principal investigator of this study. "But there is a limited number of exoplanets for which these molecules have been detected with a high significance, which makes us question the models."